How many times have you been told that you look so well? I have lost track of the number of people who have said that to me over the years.

M.E. is considered as an invisible illness since there is often little or nothing that can be seen to indicate that you are ill. Perhaps those who are most likely to discern the differences and understand your illness are those closest to you and who see you every day. 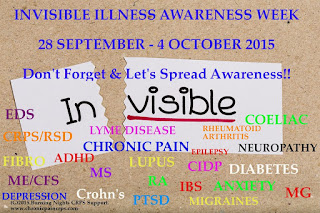 In my blog I want to explain why I fight for awareness as an illness advocate.

I hope you can join me in raising awareness and understanding. Every little helps even if it's just by sharing this blog.