To sleep or not to sleep!

In the last week I`ve once again been suffering from insomnia and those horrible nightmares and dreams.

I feel like my bed is a battlefield. I can`t recall the last time I had a good night`s sleep!

So what`s going on?

Well sleep dysfunction is a common problem for people with ME which includes
And it seems that the most common sleep dysfunction in ME is light sleep, where you never hit the deep stages of sleep (Stage 3 & 4) required for restorative sleep. This is because the endocrine system (which produces hormones) is dysfunctional in people with ME. In a healthy person, the body naturally produces more dopamine and serotonin in the evening, as it gets darker. These two hormones are released in the brain, causing the normal progression of all of the stages of sleep, including deep sleep. Without enough of these hormones, the brain stays in the light stages of sleep.

So no wonder I always feel tired!

I have written a few poems about the problems of sleep in ME and I was approached by Julia Cottam to use these poems for The Big Sleep for ME during ME awareness week in May 2013
https://www.facebook.com/TheBigSleepForMe?fref=ts

She along with M.E. Awareness: Words and Pictures provided the artwork for the poems
https://www.facebook.com/MEAwarenessPics?fref=ts

I think the combination works well and helps to bring the poems alive.

Here are a couple of examples. 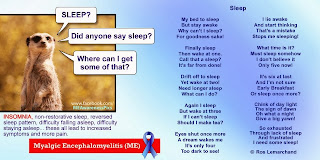 ﻿
The second poem ME Sleep patterns is about the changes that take place in sleep patterns from hypersomnia to insomnia, sleep reversal and unrefreshing sleep. 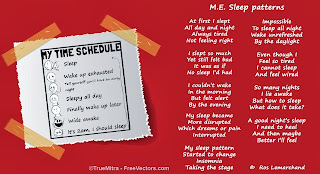 In the early stages of the illness hypersomnia is more the problem, when you need to sleep a lot longer than `normal` yet don`t feel refreshed. This may also happen in a relapse. Some find a reversal of their sleeping pattern and find themselves sleeping more in the day than the night. And then insomnia seems to become the pattern later in the illness.

After ten years of this illness I seem to mostly suffer from insomnia, frequent awakenings or weird and lifelike dreams. The last time I had a severe relapse was a couple of years ago and it was as if I had gone back in time and all I wanted to do was sleep.

Why write poetry about M.E.?

I know poetry is not everyone`s cup of tea but I have found it to be a good way to express how I and others feel about living with this dreadful illness.

It`s a simple but effective method to say directly and succinctly what it`s like to live with ME.

It`s a simple and easy way to help others to understand what it`s like to live with ME.

My poems are a window on a life with ME, how it affects and changes lives, the suffering with so many symptoms, the lack of understanding, the emotions and experiences that so many have in common.

Many people find it difficult to explain what it`s like to live with ME.
Usually it`s only others who suffer the same who can understand and empathise.
Through my poems I want to increase the level of understanding and to help others to feel less alone with this illness.

I have been writing poems for many years and it`s only more recently that I  have started to focus more on ME. Writing poems has helped me to cope with this very difficult illness. I have found it has helped me to write it down and put into words how I feel. At times it has been a painful and emotional process - especially when I`ve read back the poems to myself. I guess seeing it in black and white hits home and the reality of my life since becoming ill.

If you have been diagnosed with ME, or even another invisible illness, I hope you will be able to identify with my poems. I want you to know that you are not alone.

If you don`t have ME I hope that my poems help you to understand this difficult and complex illness.

I hope that it will help you to gain some small insight to what it`s like to live with ME.

This is the first poem I wrote about ME and formed the basis of my book of poems about ME. 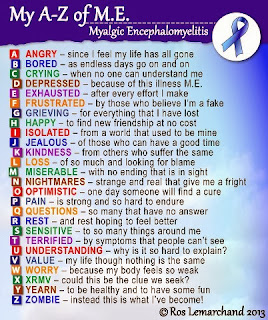 A percentage of sales will be going to Invest in ME
http://www.investinme.org/