Well here we are again yet another International M.E./CFS & FM Awareness Day on 12th May.

I first wrote about this day back in 2014 and entitled it M.E. Groundhog Day. 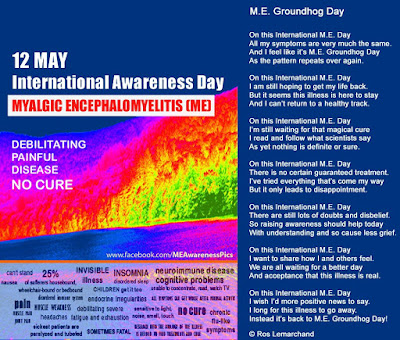 For me personally there doesn't feel like that much has changed. And now with the coronavirus I suspect that research into M.E. has gone to the back burner. Perhaps if it was as infectious as Covid 19 and many people died then it would receive the same response and treatment.

So for those of you who don't know why 12th May is special,or need to be reminded, please read the following explanation behind the day and the date.

The idea originated with Tom Hennessy, the founder of RESCIND, Inc. (Repeal Existing Stereotypes about Chronic Immunological and Neurological Diseases). Mr. Hennessy was based in the US but understood that it needed to be an International event. He designated May 12 as the International Awareness Day for the spectrum of illnesses he called Chronic Immunological and Neurological Diseases (CIND).

May 12 was chosen as it coincided with the birth date of Florence Nightingale, the English army nurse who inspired the founding of the International Red Cross. Nightingale became chronically ill in her mid-thirties with a Myalgic Encephalomyelitis/Chronic Fatigue Syndrome (ME/CFS)-like illness. She was often bedridden for the last 50 years of her life. Despite suffering from a debilitating illness, she managed to found the world’s first School of Nursing.
Mr. Hennessy included ME/CFS (also known as Chronic Fatigue and Immune Dysfunction Syndrome -- CFIDS), Fibromyalgia, Multiple Chemical Sensitivity and Gulf War Syndrome under the CIND umbrella. These illnesses, characterized by cognitive problems, chronic muscle and joint pain, extremely poor stamina, and numerous other symptoms, afflict people around the world in alarming numbers.
http://www.may12th.org/
GroundhogDay is a 1993 American comedy film where Murray plays Phil Connors, an egocentric Pittsburgh TV weatherman who, during a hated assignment covering the annual Groundhog Day event in Punxsutawney, finds himself repeating the same day over and over again. After indulging in hedonism and numerous suicide attempts, he begins to re-examine his life and priorities.
M.E. is much like that where the same day is repeated over and over again and like the film we are forced to re-examine our lives and priorities because of this illness.
I always try to do something extra to raise awareness and understanding during awareness month in May. This year, as last year, I am sharing a poem of mine every day. You can find all my poems on my facebook page and twitter  as well as Pinterest  and Instagram. Please feel free to share any of my poems or my blogs.

I always live in hope that something will change and one day this poem will no longer have any meaning.

Until then I continue to raise awareness and better understanding.

from the French Femme