I WANT TO REGENERATE

This is going to be a short blog as I have been suffering with what could be yet another symptom of M.E.

There are so many symptoms of M.E. that it feels like a whole system breakdown and not one part of the body seems to be exempt.

Please take a look at my previous blog and poem  about the symptoms of M.E.

I've also found as the years go by my symptoms change, some become less severe and some new ones appear.

The latest in my long list of symptoms is the development of dry and itchy eyes. On doing a little bit of searching and asking others who have M.E. I found that experiencing dry eyes is a symptom that is often reported by people with M.E.

Vision problems with M.E. are often reported and include

Anyway I'm well and truly fed up and after watching an episode of Doctor Who I've decided that I would like a new body and to regenerate like Doctor Who often does.

It could be the answer to all my problems! 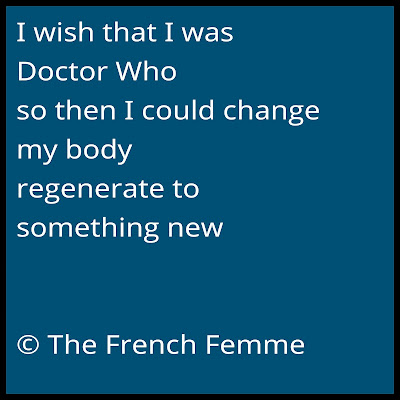 Until next time and maybe a regeneration into something new - well I can dream!!!